ESCAPE FROM THE GERMANS.

A year of army service, two years in a prison camp in the hands of the Germans, several months as an outlaw on the hills of Italy.
That is how Private Robert Cassidy of 94 Kenilworth Crescent Burnbank, Hamilton, has spent his four years of Army service.
He arrived home in July 1944 for a well deserved leave following his return to this country. Private Cassidy joined the forces in 1940, and after only a few months training he was transferred to the Mediterranean theatre of operations.

He was taken prisoner by the Germans at Hellsfire Pass a few months later however and was imprisoned in a camp north of Rome. There he spent two long, weary years under the heel of the Nazis, but luck came his way. News came through of the Italian surrender on September 8 last year (1943) and immediately he made good his escape.

He took refuge in the hills and there he lived until February of this year (1944.) Food was scarce, but he managed to remain alive by eating grapes and the meat from stolen pigs and sheep. Then came the rescue. He was transported to Naples by the allied authorities and from there shipped home to this country.

Private Cassidy, who is 28 years of age, is married and has three of a family. A Cameron Highlander, he is the third son of the late Mr Robert Cassidy and of Mrs Cassidy, 35 King Street, Burnbank. Before joining the forces in 1940 he was a miner at Dixon’s Colliery, Blantyre.

The Story was extracted from the Hamilton Advertiser Archives and sent to Historic Hamilton by Wilma Bolton. For more great stories please visit Wilma’s website www.wilmabolton.com where you will find great real life stories from the the miners of Hamilton.

Sir Henry “Harry” Lauder was born on the  4 August 1870. He was a Scottish Music Hall and vaudeville theatre singer and comedian, and a substantial landowner.

He was perhaps best known for his long-standing hit “I Love a Lassie” and for his international success. He was described by Sir Winston Churchill as “Scotland’s greatest ever ambassador!” He became a familiar world-wide figure promoting images like the kilt and the cromach (walking stick) to huge acclaim, especially in America. Other songs followed, including “Roamin’ in the Gloamin”, “A Wee Deoch-an-Doris”, and “The End of the Road”.

By 1911, Lauder had become the highest-paid performer in the world, and was the first Scottish artist to sell a million records. He raised vast amounts of money for the war effort  during World War I, for which he was subsequently knighted in 1919. He went into semi-retirement in the mid-1930s, but briefly emerged to entertain troops in World War II. By the late-1940s he was suffering from long periods of ill-health and died in Scotland in 1950.

Lauder was born in his maternal grandfather’s house in Bridge Street Portobello Edinburgh, the eldest of seven children to John Lauder, a Master Potter, and his wife Isabella Urquhart Macleod née McLennan. John Lauder, was a descendent of Lauders of the Bass and Isabella was born in Arbroath to a family from the Black Isle Lauder’s father moved to Newbold, Derbyshire in early 1882 to take up a job designing chine, but died of pneumonia on April 20. Upon his death, Isabella, left short of money (the £15 Life Assurance Policy of her husband not going far), moved the family to Arbroath. Education beyond the age of 11 then requiring payment, Harry worked part-time at the local flaxmill to fund that. In 1884 the family moved to live with Harry’s maternal uncle, Alexander McLennan, in Hamilton, where his uncle found him employment at Eddlewood Colliery at a weekly wage of ten shillings, a job which he maintained for the next decade.

Lauder leased the Glenbranter estate in Argyll to the Forestry Commission and spent his last years at Lauder Ha (or Hall), his  Strathaven home, where he died on 26 February 1950, in his 80th year. His funeral was widely reported, notably by Pathé newsreels. One of the chief mourners was the Duke of Hamilton, a close family friend, who led the funeral procession through Hamilton, and read The Lesson. The largest wreath came from the Queen Elizabeth, The Queen Mother (who shared her birthday with him) followed by one almost as large from Mr & Mrs Winston Churchill. Sir Harry was interred with his mother and brother at Bent Cemetery, Hamilton.

Wilma Bolton recalls Harry’s funeral, she wrote: “The cortège was coming up the Bent Brae heading for the Bent cemetery. I remember being in the crowd watching it with my mother and Mrs Alexander our next door neighbour. I was six at the time. The gasometer in the background was in Tuphall Road and the old gas light brings back memories of climbing them to turn the gas off.” 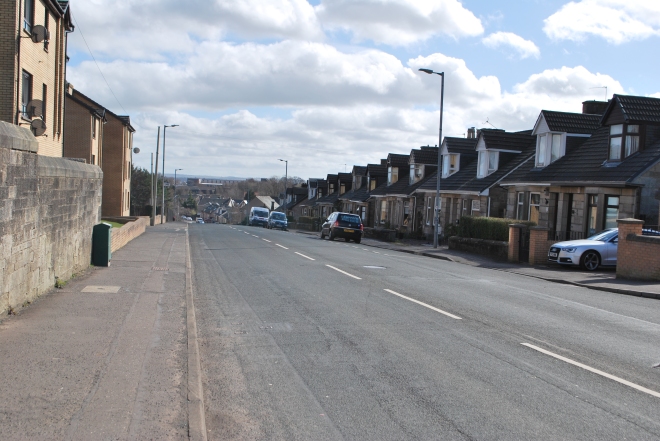 Here’s something for a bit of fun! Aln Scullino sent us this picture of a piece of Artwork that has looked down on you for many years! Aln told us:

” I spotted this when out for a walk the other day…. must have been passed it a hundred times and never noticed it before”

Tommy Kinsella, Hamilton’s local photographer snapped weddings, Birthdays and special occasions. His daughter Margaret Caddens sent us some photos of an unknown model in Hamilton along with some wedding pictures, Margaret told us:

“My Dad was a photographer in Hamilton for many years,i have lots of his proofs that are black and white, and some that my Mum coloured by hand. They are mainly portrait shots,a few weddings and babies and some glamour shots.its interesting to look at them and wonder ‘where are they now’.

Sadly Dads gone now Only know he was like the area photographer,he developed them at home It used to be wherever I went in Hamilton,someone would stop me and say, you’re Tommy Kinsellas lassie,he took took my wedding photo you know. I’ve got tons of his proofs or weddings,babies and sweethearts.”

We would like to track down who the people are in the pictures! Do you know the model or who’s wedding it was? If you do then please let us know.

You never know, maybe Margaret has pictures of your family in her dads collection. 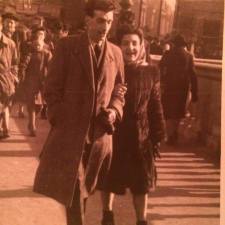 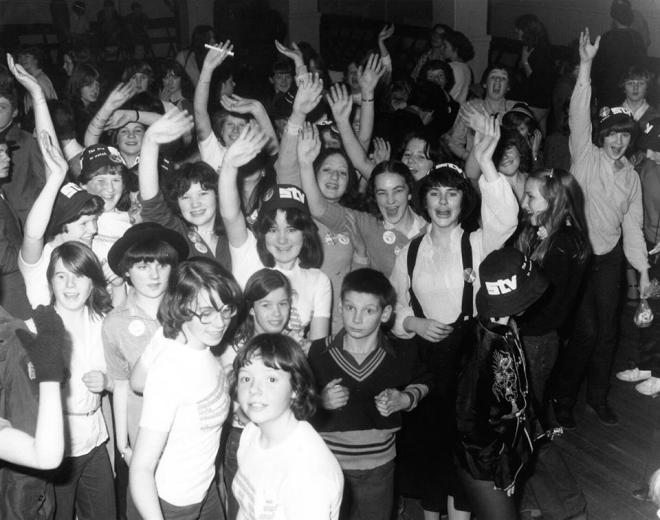 Jackie Bendoris Hillis sent us a picture of a disco at the Hamilton town hall. The disco was filmed for ITV in the mid 1980s.

“I found this old picture from the early 80’s. It’s from a STV disco at the Hamilton Town Hall – I’m right at the front in the STV t-shirt so that’s probably why they gave me the picture.

It can’t have been through school as I can see some people I know who went to different schools (although we are all secondary school age so that might be a clue). I’d love to know who else was in the picture with me x”

Were you at the STV disco or do you know anyone in the picture?
Let us know!

Whenever I think of Hame”” Hamilton”comes into my mind,
The people and the places, they are of a very special kind,

The place has changed so much, over all these many years,
Sometimes, just one wee memory, brings back happy tears,

I spent my youth in this great place, with “happy, happy days,
That’s where my life was shaped, in oh so many many ways,

Not so much the place, but all the people who made this town,,
For passion pride n’ friendship,” Hamiltonians” hold the Crown””

(A Very special toon’)
The above poem was written for Historic Hamilton by Hugh Hainey.

Mid-Stonehall was a farm house that was situated on the Neilsland Estate,  in the parish of Hamilton and two miles from the Town Centre. It was a two storey building and was classed as a mansion house, it also had Estate Offices. 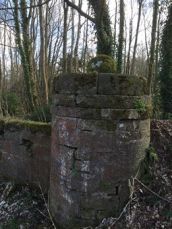 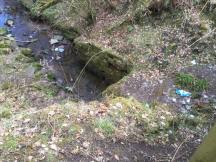 The land offered a spacious park with studded old and luxuriant trees and the estate commands from a sheltered position and a panoramic view of the lower vale of the Clyde and the scenery beyond. It also boasted of having another view that looked over the Glen.

Mid-Stone had approximately 277 acres with beautiful gardens that lead down to a burn and there were two other neighbouring farms that were called Torhead & High Stonehall.

When Mid-Stonehall was put up for sale the Meikle Earnock station was also mentioned as being a seven-minute walk from the farm, so just like today the local rail network was considered when buying a house.

Today I visited the site of Mid-Stonehall and apart from old stairs and sandstone walls sadly nothing has been left to show what a grand building used to occupy the land.

A snapshot in time, Wilma Bolton sent us a picture of how Morgan Street looked back in the 12th May 1937. Wilma told Historic Hamilton,

My parents Jimmy and Peggy Russell lived in a single end in this close from 1940 until 1947. I remember being in the washhouse with my cousin Eleanor Lang while my mother and her sister Ella Lang were doing the washing.

My aunt Ella lived in Morgan Street. Both of us girls were aged about three at the time. My uncle Guy Lang had a newsagent and barber shop across from the close. We moved from Selkirk Street to the prefabs in Mill Road in 1947.

There are garages where the houses stood but the shop’s across from them are still standing.

Have you got a picture of a close in Hamilton that no longer stands? If you have then we would like to see it. Send it to us on the page or by email historichamilton@icloud.com

McArthurs Woolen Mill was located at 24 Woodside Walk and it was a rough rectangular 3-storeye’d factory building dating from 1921, it was a large imposing building that looked out of place in the street.

It had a comprising reinforced-concrete frame with a flat roof and the facade, which had multi-pane metal-framed windows, it was faced with ashlar and bull-faced snecked rubble, as was the SE-facing side wall, which also had a 1921 date-plaque.

The side and rear walls were made of red brick and the building started life an extension to the former Woodlands Bakery for Messrs Samuel Gilchrist Ltd.

The Tartan Factory was closed by 2001 and was shortly demolished after. There are now new flats that occupy the land where the building stood.

The old Grammar school No longer existing as an independent institution, Hamilton Academy had a history going back to 1588 when it was endowed by Lord John Hamilton, 1st Marquess of Hamilton.

The school, then known as the Old Grammar School of Hamilton (not to be confused with the present Hamilton Grammar School) stood near the churchyard adjoining Hamilton Palace until in 1714 Anne Hamilton, 3rd Duchess of Hamilton, great-granddaughter of the Founder, re-located the school to a new building on the newly named Grammar School Square also in the lower part of the town, and presented this to the Town Council of Hamilton.

The Statistical Account of Lanarkshire of 1835 notes of this school building that it “is a venerable pile, near the centre of the town, containing a long wainscotted hall, emblazoned with the names of former scholars, cut out in the wood, as at Harrow.