An 84-year-old woman was rescued from a burning building on Monday the 6th January 1936 when four families were rendered homeless in a fire which broke out at 200 Low Waters Road.

Mrs Wood is 84 years of age, had to be carried from the “building. The property is of one storey, the ground flat being occupied by Mr Cocozza as a cafe and & dwelling-house.

When passing the property about 3 a.m. a police officer saw flames and smoke coming from the front of the shop. He immediately notified Lanarkshire Fire Brigade and then warned the tenants.

Mr Cocozza, who resided with his family at the rear of the house at once awakened his family and shepherded them into the street in their nightclothes, the families rushed from the building with any household goods which they could grasp. In their flight the younger children of Mr Cocozza were in a state of alarm but were all taken to safety by the firemen.

On reaching the house of Mrs Wood, it was seen that she was unable to leave the building without aid, and she was quickly wrapped up and carried out. By the time of the arrival of the brigade, the fire had got a good hold, and the front shop and the house immediately above were a mass of flames.

The fire brigade, however, managed to prevent the outbreak spreading to adjoining property, and damage was principally confined to the shop and the houses directly above. The Lanarkshire Fire Brigade used gas masks, with which they have recently been equipped, and this made it possible for the firemen to reach the seat of the fire quickly, without danger from smoke. 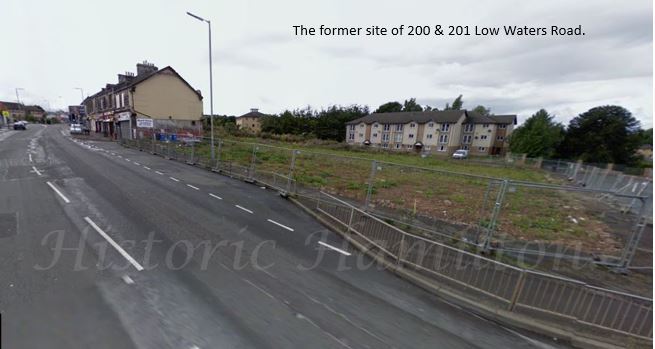 A pet canary belonging to Mrs Brown was found by the firemen dead in its cage, the smoke having suffocated the bird.

Mr and Mrs Wood were later taken to friends in Glasgow, while the other families found accommodation with relatives. The cause of the fire stated to have been a short circuit in the café electricity system.

One of the houses was totally destroyed, while the shop was extensively damaged, the remaining houses suffered considerably from smoke and water.

I wanted to know what happened to Mrs Wood after the fire, so I did some further research on her. She was the wife of John Wood who was the local Butcher at Low Waters road and Mrs Wood had previously been married & widowed twice before marrying John, she was married to John Green & John Rice who were both Hamilton men. Mrs wood was the daughter of William Gibson a cattle dealer & Elizabeth Pollock.

The shop mentioned at 200 Low Waters Road was rented by Rosaria Cocozza who also owned the shop through the wall at 202. The shops were used as a confectioners & ice-cream Restaurant and a Butcher’s next door. Mrs Margaret Wood may have worked here, as her husband was the local butcher, (his old shop in 1930 was up the hill at 216 Low Waters Road.)

Margaret Wood died three years later of Heart Failure, she died on the 20th January 1939 at her house in 198 Low Waters Road and she was survived by her husband.

DEATH OF AN AGED RESIDENT. The Low Waters district has lost “Granny” as the children around the area loved to call Mrs Janet Brownlie, of 10 Corporation Buildings. Born in Bannockburn, she came to Hamilton as a bride of 19 fully sixty-four years ago, and she has resided in Low Waters since that early period in her life. Predeceased by her husband, she is survived by the married members of her family, forty grandchildren and fourteen great-grandchildren. She died on Monday night to the regret of neighbours and many friends and not least the children who constantly had experience of her kindliness and interest. Ref. Hamilton Advertiser. 7/1/1933 page 6                                      Wilma S. Bolton. 2012