Follow Historic Hamilton on WordPress.com
The Seagrave family.
Celeste Landeros contacted us to see if we could assist with her family research. Celeste said:
“Hello Garry, I’m so excited to find your FB and website, historic Hamilton. I am planning a family heritage trip to Scotland this summer and have been researching our family’s past in preparation. My grandmother, Bridget “Betty” Seagrave was born in Burnbank in 1911 and immigrated to Scotland by herself in 1929.
We have very little information about her father, William C. Seagrave and her mother, Ellen Hall. There is a William Seagrave, age 25, in the 1901 census, living with the London family in the Albert Buildings. He is listed as a “pit worker,” presumably with Earnock. After that nothing. My grandmother’s marriage registry lists her father as having been born in Armah, Ireland.
My great grandmother, Ellen Hall, was born in Glasgow and the 1871 census lists her as living with her parents, both from Armah, on the notorious Muse Lane, that was “cleared” around that time. Her parents immigrated to Philadelphia but appear to have left her behind at age 2. She next shows up in the 1891 voter rolls in Glasgow, living on Whitevale — where I understand there was lodging for young ladies. How did she end up in Burnbank? How long did she live there? How did she meet William Seagrave? When did she pass away?”
Celeste, I see from what you have gathered during your research that you have got most of your family documented. The small questions of ‘How’ & ‘Why’ can sometimes never be answered but through extensive research the clues that you stumble across sometimes point you in the right direction to help find your answer. Did you know that today there are still members of the Seagrave family who live in Hamilton and they may be descendants of your great grandfather?

I will try to fill in some blanks for you and I started with your great grandfather William C Seagrave. I found that he died 21st of October 1948 and when he died, he was 76 years old. He died at 41 Bothwell Road in Hamilton and this may tell us that the family were not in any kind of financial position to pay for a doctor. 41 Bothwell Road was the address of the Hamilton Combination Poorhouse and when people were admitted it was usually a last resort, my great grandfather also died at the Hamilton Poorhouse. 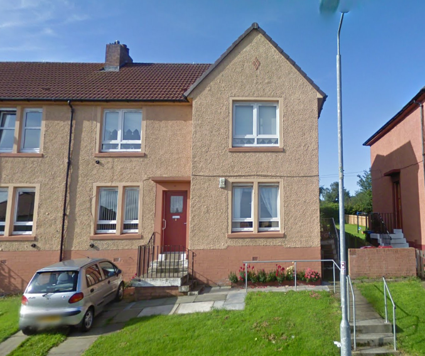 Before William was admitted to the poorhouse, he was living with his daughter Margaret at 34 King Street, Burnbank, Hamilton. This house still stands to this day and hasn’t changed much since 1948. Your great grandfathers’ parents were called Edward Seagrave who was a General Laborer & Anne McDermott.
Your great grandmother Ellen Hall had passed away before 1948, so I then went looking for her death certificate and I found that Ellen died ten years earlier on the thirteenth of September 1938. She died at 34 King Street and her son A. Seagrave was the person who registered her death. Ellen’s parents were called Andrew who was a Tailor Journeyman & Mary Boyle.

William & Ellen married in Glaslough, Monaghan in Ireland on the 14th of August 1901. Their daughter Margaret was then born on the 28th of October 1915 at 7 Greenfield ‘New’ Rows. This house would have come with William’s job as a coal miner.
When I looked at the 1911 census, I found that both William & Ellen were born in Ireland and perhaps this is why they married in Monaghan, it could have either been where both lived before coming to Hamilton, or at lease where Ellen lived as traditionally the bride gets married in her home town.

Celeste, you had mentioned that you found Ellen on the 1871 census living in Glasgow. I have found no evidence of her being alive in this year! The 1911 census has her age as 19, however, I believe that this has been a mistake and it should have been recorded as 29. Also, on her death cert her age is 58 making her birth year c1880.
The reason why William & Ellen moved to Hamilton is unclear, but I suspect that they moved here not long after getting married. It is more than likely that they moved to Hamilton for William to gain work at Greenfield Colliery where many men from Ireland worked. I also have to add that during my years of research, there have been many families move from Monaghan to Hamilton for work at one of the coal mines, so perhaps William knew someone from his village who already worked here?
Celeste, I’m sorry that I can’t give you the answers that you are looking for, but please do let us know about your trip when you come over to visit us in the summer and as I mentioned at the start of this post, there are still members of the Seagrave family who live in Hamilton and perhaps one of them might get in touch.
Garry,
Loading Comments...