Tommy Kinsella, Hamilton’s local photographer snapped weddings, Birthdays and special occasions. His daughter Margaret Caddens sent us some photos of an unknown model in Hamilton along with some wedding pictures, Margaret told us:

“My Dad was a photographer in Hamilton for many years,i have lots of his proofs that are black and white, and some that my Mum coloured by hand. They are mainly portrait shots,a few weddings and babies and some glamour shots.its interesting to look at them and wonder ‘where are they now’.

Sadly Dads gone now Only know he was like the area photographer,he developed them at home It used to be wherever I went in Hamilton,someone would stop me and say, you’re Tommy Kinsellas lassie,he took took my wedding photo you know. I’ve got tons of his proofs or weddings,babies and sweethearts.”

We would like to track down who the people are in the pictures! Do you know the model or who’s wedding it was? If you do then please let us know.

You never know, maybe Margaret has pictures of your family in her dads collection. 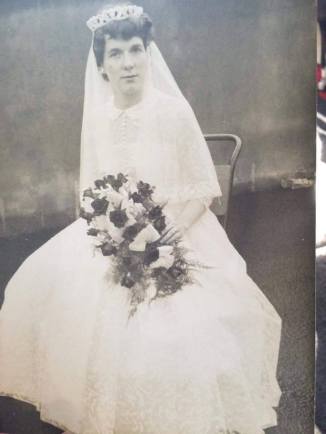