Hi Folks, I want to share something with you all. From time to time my readers send me things for safe keeping. I have been sent pictures, books, maps and family keepsakes.

I am usually sent these things as people don’t know what to do with them and they don’t want their belongings to be put in the bin or lost.

In September this year, Mary Wood was kind enough to give me some old magazines and flyers that she had kept since she was a young girl. Mary also sent me an old family document that had been passed down to her, which I believe, once belonged to her mum.

This document was an exam paper from St. Johns and it is a real snapshot in time which it is dated 19th of November 1941. The girl at the time who sat the exam was called Agnes Paterson who was a 1st-year pupil at the school. It appears that Agnes Paterson was a very bright wee girl, as she got good marks.

Nonetheless, this is a fantastic piece of Hamilton’s History which I have now digitised and I have it safely filed away for safe keeping. Everything that I have in my Hamilton collection will one day either be donated to the museum or the Hamilton Reference library.

If you have an old Hamilton object or document that you would like to be preserved and you don’t know what to do with it, then I am happy to collect it and keep it safe. If you have any old papers, then I would also like to digitise it and keep it at Historic Hamilton. In turn, this is keeping our history documented for future generations of people to read, or for people in other countries who want to read up on our history. 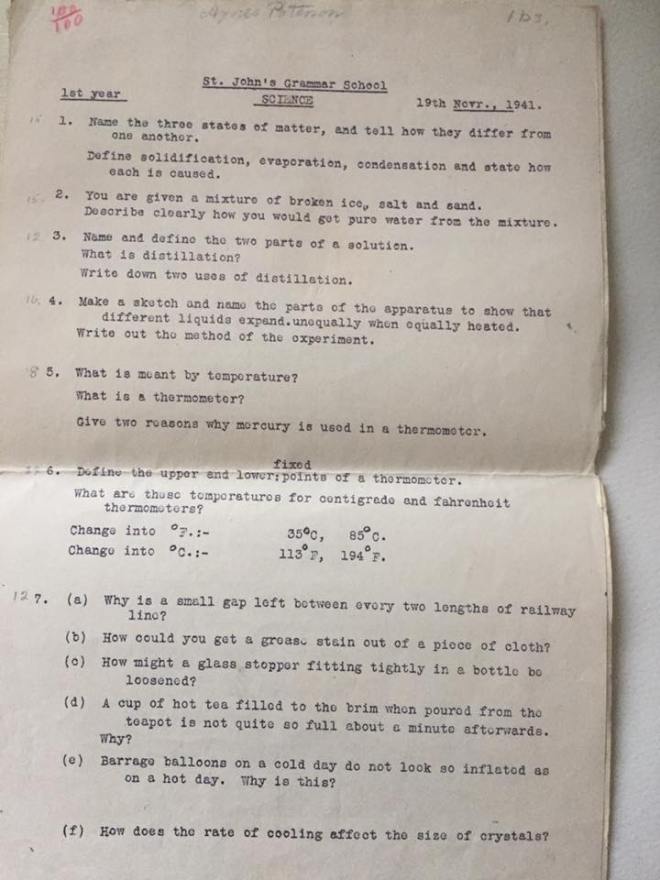 Mary, thanks again for your donation and I will be researching the history of the wee girl called Agnes Paterson, who sat this exam on the 19th of November 1941. 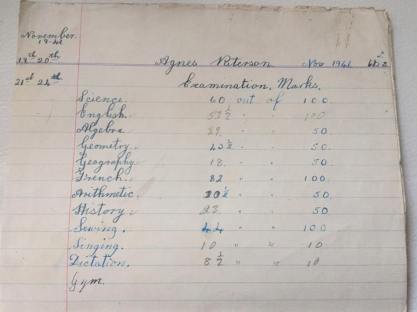 The old Grammar school No longer existing as an independent institution, Hamilton Academy had a history going back to 1588 when it was endowed by Lord John Hamilton, 1st Marquess of Hamilton.

The school, then known as the Old Grammar School of Hamilton (not to be confused with the present Hamilton Grammar School) stood near the churchyard adjoining Hamilton Palace until in 1714 Anne Hamilton, 3rd Duchess of Hamilton, great-granddaughter of the Founder, re-located the school to a new building on the newly named Grammar School Square also in the lower part of the town, and presented this to the Town Council of Hamilton.

The Statistical Account of Lanarkshire of 1835 notes of this school building that it “is a venerable pile, near the centre of the town, containing a long wainscotted hall, emblazoned with the names of former scholars, cut out in the wood, as at Harrow.