Hamilton honoured their champions in May 1986 when the district council held a civic reception and dinner to mark Hamilton Accies achievement in winning the Scottish first division title.

Accies players and officials paraded the trophy through the streets from Douglas Park to the Town Hall, where a crowd of over 1000 people were waiting to greet them. The provost of the time Sam Casserly spoke of the club’s achievement, as did Ian Gellalty, president of the Scottish League.
The trophy was then displayed to the crowd from the Town hall Balcony before the players and other guests went inside to dinner. After the dinner, Mr Casserly passed on the district councils congratulations to the club and he presented the chairman Jan Stepek with an inscribed Silver Salver.
Hamilton’s Labour MP George Robertson also spoke and commented: “After six years of opposition it’s lovely to be on the winning side!” George Robertson added “The success of Hamilton Accies is a success for the whole community of Hamilton. This will do much for the reputation and image of the area.”

Mr Stepek then presented a mirror bearing the Club Crest to the Council. A highlight of the afternoon was a recording of two songs written by supporters Dave Marshall and Jim Irons to honour the club’s performance.

Did you attend the parade in May 1986? If you did, then let us know or even better, Share your pictures. 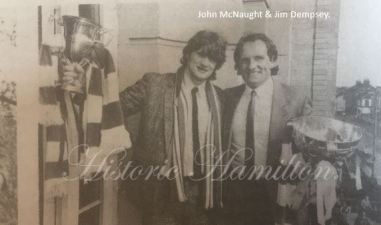