This picture was taken at Campbell Street in 1985. 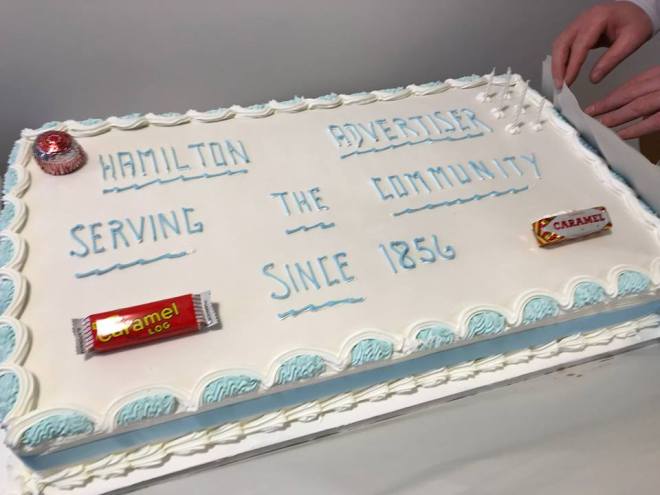 For me, it was the end of an era for Campbell Street -when I heard that the Hamilton Advertiser were moving premises after reporting the local news from its old building for more than 150 years. The old press building was at the heart of the town and in its heyday, not only did the reporters all work from the newsroom they also printed and distributed the newspapers from here.

They finally closed its doors to the public on Wednesday the 13th of December and just before it closed, the last customer walked in – this customer was me! Me being the sentimental guy that I am, was quick to tell everybody that I was the very last customer in over 150 years publishing to use the Hamilton Advertisers services in the Campbell Street building. I love nostalgia and it got me thinking of who was the very first customer to pay for the Hamilton Advertisers services. So, a wee trip to the Hamilton Reference library will be on the cards to see if I can find out.

I have met with the staff at the Hamilton Advertiser before, including the Editor and big chief Robert Mitchel or Bob as he is better known to his staff.

Bob’s teamwork great together and when I first met them I was a bit apprehensive walking through the doors of the old press building as I had in my head that the editor was going to be like the one in Spiderman shouting at all of his staff. But no, they are all very nice people and very approachable, and always if you have a story, then they are more that willing for you to come and have a chat with them.

So, as I had mentioned, I was the very last person to use the Hamilton Advertiser in Campbell Street, I was placing an advert in the paper for Historic Hamilton which you will all see in next weeks edition. I spoke to two lovely ladies called who were called Lorna Marshall who is the receptionist and Carole Mathers, who is the Multi-Media Sales Executive.

So, it was sad times for Carole too as this building has played a very big part in her life, but as they say you have to move with the times. I only hope that this Historic building does not get torn down and become another car-park, lets watch this space – pardon the pun.

The new Hamilton Advertiser premises are now located on the ground floor of the Brandon House business centre and they have an open plan office that looks out over Duke Street and the building is also right at the bus station, so bear in mind, Bob’s reporters are watching you as you walk in and out from the bus station and they will see everything that’s going on. This is also an excellent vantage point for the ‘Reader of the Week’ section, so if you’re up this way, then you may just be lucky enough to make Page 3 and get a free box of chocolates.

I paid a visit yesterday (Friday the 15th) and as usual, Bob was still in the office arranging next weeks stories, I had a wee chat with Bob and Carole and they were showing me around. I managed to get a wee bit of the Tunnocks Cake and Carole was showing me my advert for Historic Hamilton. So maybe I can also be classed as the first customer in the New building?

Times are indeed changing as more of the younger generation are turning to news in the digital format, The Hamilton Advertiser’s Facebook page now has a massive 17,314 followers but I’m sure that most of you will agree that it’s just not the same as sitting down with a cup of tea at the table and having a read of the local news.

We still turn to the Advertiser to either do the crossword or to see what is happening in the town or to find the local guy who will give you a free quote to fix your fence. With Bob’s team working all week to get you the best stories I’m sure that the newspaper will still be here for many decades to come. So, to all the staff, good luck in your new home and we hope that you have many happy working years at the Brandon House building.

One of the major companies in Hamilton round about the turn of the 20th century was Scott, Stirling & Co!

Scott, Stirling & Co were local coach builders in the town and they were founded in 1862 under the name J & C Stirling. They started off as a small business but quickly grew due to their excellent workmanship and at the time coach building was one of the oldest industries in Hamilton.

In the year 1862 when the firm was established the business advanced rapidly. So mush so, that in a comparatively short period of time, it was found necessary to make considerable extensions, and from an original small shop, the firm now occupies an area of nearly one acre of double storied buildings, elaborately fitted with the most modern wood-working machinery.

Scott, Stirling & Co were so reputable that not only did they build coaches and do repairs in Hamilton, they did work all over Scotland, England & Northern Ireland.

They were noted as stating ” A supply of these vans are always on hand, or can be built at the shortest notice” They could possibly have been the Quick Fit of it’s day in the late 1800s.

Below is an advertisement for the carriage works that was gave to Historic Hamilton by Lesley Fife. There is also a Yellow outline marking where the possible site of the coach works were situated just next to the Hamilton Advertiser building, this was taken from the 1847-1895 map of Hamilton. 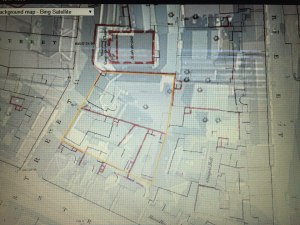