Follow Historic Hamilton on WordPress.com
One of the hardest things that I find, is for people to share their pictures with me, however, Christine Dodd got in contact with me on the Historic Hamilton Facebook page as she found a box of old family photos that were of no sentimental value. She had asked if I would be interested in them as they would most likely get thrown in the bin and as always, I collect anything that’s Hamilton related, including old family pictures.
When any of my readers sends me anything that is Hamilton related, whether it be a book, an object or picture, then I am more than happy to take it and look after it. I have quite a large Hamilton collection which consists of books, objects and of course old pictures of Hamilton and its people. I received Christine’s pictures a few weeks later and they are now safely stored away with my collection and over the next few days, I will post these on my website, so that they will be kept for future generations to see; Christine wrote:
“Hi Garry,
I have been sorting through some of my mum’s belongings and have found a lot of photos mostly from the 1930’s and 40’s which belonged to her cousin who lived in Hamilton. I have scanned some of them and attached them here. There’s quite a lot and I didn’t want to start posting them all on the Historic Hamilton Facebook page so thought you might want to have a look & just post what you think would be of interest. I’d also be happy to pass on originals if you know anyone who would be interested as most are of no sentimental value to me, there are only a couple I want to keep. I just hate throwing photos out as I always think they are of interest to someone so I’ve been scanning them all and contacting people who might like to have them (have already posted some in Low Waters school page and sent some to the Young Farmers group too. My husband thinks I’m mad and thinks I should’ve stuck them all in the recycling

Where there is information on the back, I have put this as the photo’s name. My gran’s maiden name was Massey and the photo of Harry Massey is my great uncle, William & Mary Massey are my great grandparents but beyond that I don’t know who most of the people are.
The ones of High Park Crescent I have put a question mark against as only one of them says this on the back. Another of them says Eddlewood Place but it is clearly the same houses, so I don’t really know which is correct.
Please let me know if you would like the others sent on to you. There are only another 10 or so.
Regards,
Christine”. 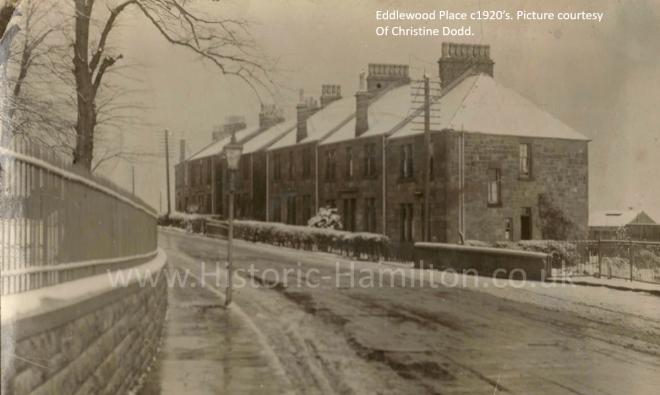 So, Christine, I did quite a lot of studying of your old pictures and also looked over the old maps of Hamilton and I believe that I have found where the confusion lies with the name Eddlewood Place & High Parks Crescent.
To start, what the photographer was doing was taking pictures around their house where they lived, as most of your pictures seemed to be around this part of Hamilton, including Eddlewood, Strathaven Road and also in the fields overlooking Hamilton.
Now, Eddlewood Place no longer exists, and it was a row of houses which around 1915 was owned by a spirit merchant who was called James Bryson and its location was immediately behind High Parks Crescent and also the row of houses were just down the road from where William Massey lived at 156 Strathaven Road.
So, in one of your pictures you have supplied a great picture of Eddlewood Place and possibly could be the only one in existence and the picture was taken from the wall at Eddlewood House. If you could see further to the right of this picture, then High Parks Crescent would be just behind it.

So, to give some justice to your pictures, I looked at your great grandparents William & Mary Massey, who as you know lived up at Thornyhill Cottage on Strathaven Road, the address was later given a door number and from the 1930’s it was known 156 Strathaven Road.
I had a look at your family’s history, and I found that you great gran was called Mary Brown, her parents were called James Brown & Flora Kinlock She was brought up in Quarter and she lived at 71 Darngaber Rows. When she married, she was working as a domestic servant. Your great, great grandfather James was working as a Colliery engineman. James brown was born at Dalserf around 1838. Your great, great grandmother Flora was born at Bonhill in Dumbarton around 1831. Mary had eight other siblings who were called James, Thomas, Alice, Alexander, Ellen, Janet, Agnes & Flora.

Your Great grandfather William Massey was born in Ireland around 1863 and his parents were called John Massey & Martha Davidson. William was living down at 201 Low waters Road when he married. He had six other siblings called Mary, Elizabeth, Martha, Agnes, John & David. William and his parents moved from Ireland and over to Hamilton between 1863 & 1866. His father was also a miner, so it is likely that they moved to Hamilton to gain work in the col mines.
William & Mary married on the 11th of March 1892 at Mary’s house 71 Darngaber Rows. They were married by the Rev George Blair, minister for Quarter and their witnesses were William’s brother John & Mary’s sister Janet.
After your great grandparents married, they got their own house in 1895 and they moved to a flat above the public house in Limekilnburn. I have to note that this flat and the pub were both owned by James Bryson ,the spirit dealer who also owned Eddlewood Place in 1915, so it’s possible that William may have did some work for the spirit dealer, there certainly seem to have known each other. William was still working as a coal miner and he was paying a yearly rent of £5. 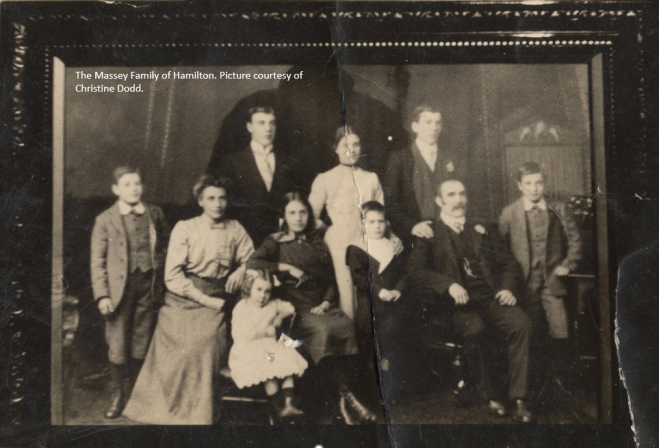 In most cases coal miners did not earn a lot of money but this was not the case for your great grandfather as he bought Thornyhill Cottage and in 1905, he is recorded as the owner. He did have a tenant living here with him, a man named Thomas Gold, so perhaps this was how he earned an additional income. The man Thomas Gold could have been a friend of the family, as he lodged with your great grandparents right up to at least 1925, so quite a long time for a lodger to be living with a family. The cottage would have been really cramped, as Thomas Gold lived here with his daughter Mary and two sons Thomas & Arthur, he was a widow.
Your great grandparents had eight children, who were called Flora, John, James, Martha, William, Harry, Alexander & Mary. Below is another one of your pictures that shows Harry Massey, your great uncle with a Clydesdale horse, this picture was taken at Eddlewood Farm (previously Hasites Farm)

Christine, in some of your pictures that you sent, you had the family Bryson in them and I have looked at this and there could possibly be a marriage between one of the Massey family or if this was not the case, I found that in 1940 there was a widow called Jeanie Bryson, who lived at 221A Strathaven Road, perhaps if there was not a marriage connection, then they were certainly close neighbors. 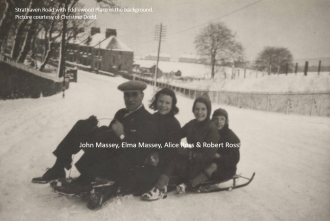 The Bryson & Massey family were close enough to be going on outings with each other. I also have to note that the Bryson family lived at Eddlewood Place and on the 12th of April 1917 a James Bryson aged 76 died here, could this be the same Jim Bryson that you have in your picture? I get the feeling that the Massey family were very close one, and your pictures are fantastic, I will post the rest of your pictures with no names attached below. I feel that I have given you a small insight into the early tears of your family and I want to speak about another picture that you have sent.
The picture showing a half-built house, I believe is the construction of 53-59 High Parks Crescent I have compared the picture to a recent image of Google street view and the doors and windows match up. If you look at the picture further down the street you can see Eddlewood Place. Again, I believe that this may be the only picture in existence showing the construction of High Parks Crescent. 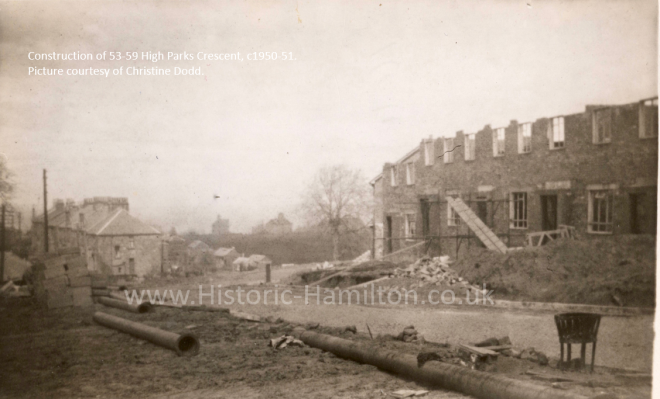 Another picture we have Agnes Ballantyne, now the name Ballantyne has been a long-established family of Dairymen and you have once again supplied me with a great piece of family history.
Agnes Ballantyne was the daughter of Andrew Ballantyne Janet Lindsay and she married William Brown in 1907, do you know if the William Brown is a relation to your family? At the time when they married Agnes was living with her parents at 19 Glebe Street.

This picture of Agnes would have been taken approximately around 1903 and she looks roughly about the age of fifteen or sixteen. She looks as if she is about to go milking the cows with a bucket in one hand and her stool in the other a bygone tradition that was used all over Hamilton in her era.
Once again Christine, thanks for taking the time to send your pictures to me, they will be looked after for many years to come.
Garry,

3 thoughts on “PICTURES FROM MY READERS.”