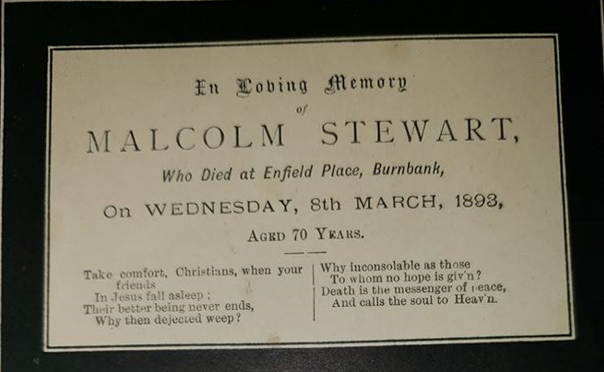 Janalee Bachand recently inherited a box of letters which included her 3-x great grandfather’s funeral notice card and she decided to get in touch with Historic Hamilton. Apart from what she has in the box she knows very little about her ancestry, so I decided to have a look for her. Janalee, here’s what I found.
I started my research with Malcolm and found that he was born on the 12th of January 1823 at Old Monklands which is now called Coatbridge. His parents were called Gilbert Stewart & Mary Johnston. He was baptised seven days after his birth on the 19th of January 1823, also at Old Monklands.
The first document that I find is on the 1841 census where Malcolm is living at a place called Chapelhall which used to be part of the Bothwell parish, now in North Lanarkshire. He was living with his parents and siblings. He is working as a coal miner at the age of 15.
He married your 3-x great grandmother on the 4th of January 1846 at Bothwell and her name was Margaret Stevenson Thomson. Margaret was the daughter of Robert Thomson & Jean Napier.
Malcolm & Margaret next appear on the 1851 census where they are living on Bo’Ness Road at Chapelhall and he is still working as a coal miner. Now I have to say that working as a coal miner was not a very well-paid job and most men who worked down in the pits struggled to feed their families.
The coal mines were very dangerous, and men & boys were often killed while at work, so I found it surprising when I next looked at the 1861 census and found that Malcolm had managed to change career and was now working as a butcher.
Within ten years, he had worked his way out of poverty and now had this fantastic job that would have allowed him to properly feed his family, in fact, he had quite a large family which I will tell you about soon. I have also never come across a man who has worked his way from being a coal miner and is now a pillar of the community which everyone would have known, so this for me is quite unusual.
So, Malcolm & Margaret had 13 children between them who were named:
Jane, 1846-1872. Gilbert, 1849-1938. Robert, 1850-1891. Mary, 1852-1883. Alexander, 1854-1883. Margaret, 1856-1931. Malcolm, 1858-1890. John, 1861-1942. David, 1863-1945. William, 1865-1954. Elizabeth, 1969-1941. Jane, 1873 & Malcolm 1877. Sadly, Malcolm & Margaret outlived five of their kids.
In 1881 the family were living at Docherty’s Buildings on Low Blantyre Road where he was now retired. The family then moved down to Burnbank and in 1891 they lived at Enfield Place; this block of tenements was part of the old Burnbank Cross.
When Malcolm retired, his sons took over the family business and staying in 1891 Robert was in charge of the shop and his brothers Gilbert, John, William & Malcolm were his assistants. I would imagine that the shop was doing pretty well to be employing so many of the family.

So, as you know Malcolm died on the 8th of March 1893. He died of a stroke and his son Gilbert registered his father’s death and took care of the funeral arrangements.
Janalee, your funeral card indicates that your 3-X Great grandfather was buried at the Holytown Churchyard. This is quite far out from Burnbank where he lived in his later years and I can’t give you an answer as to why he was buried here but it is very possible that his dad, Your 4-X Great Grandfather is buried at the churchyard. Perhaps there was a family plot here, or as this was where he lived in his younger years, then he may have felt that this place was home for him.
Janalee, if you do decide to research your family history, then let me know if you come across any pictures of your family and thanks for getting in touch with me at Historic Hamilton.
Garry,