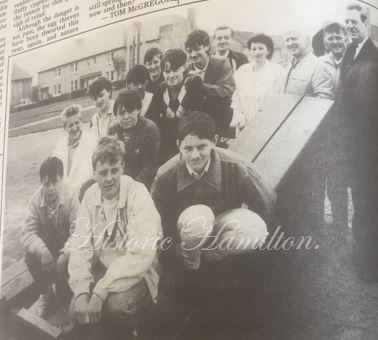 YTS in 1986.
In 1986, These group of teenagers from Whitehill appeared in the Hamilton Advertiser.
They were members of the Youth Training Scheme and they built a new play and training area outside the Whitehill Sports Barn.
This scheme was designed and organised by the Hamilton district council leisure and recreation department.
A competition was held among the teenagers to come up with a colour scheme for the equipment and it was won by 17-year-old Steven Robertson who was from Hillhouse. Steven is the boy in the front with the white coat on.
Pictured with the YTS team are the district councillor of 1986 Isaac McKillop, Linda Kerr of the Whitehill tenant’s association & David Brown of the Whitehill Community Council.
Were you one of the YTS people in the picture? Let us know.