The Hamilton fighter won Scottish, British, European and Empire titles before defeating Italy’s Salvatore Burruni at Wembley over 15 rounds to land the world flyweight title in 1966.

In McGowan’s next fight, he won the British and Empire title at bantamweight when he defeated Alan Rudkin, again at Wembley.

McGowan had been in poor health in recent years and was living in a nursing home in Bellshill. 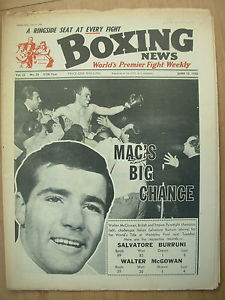 He died peacefully at Monklands Hospital on Monday night.

One of 10 children, McGowan is survived by a son and daughter and a grandson and grand-daughter.

Our thoughts go out to his family.