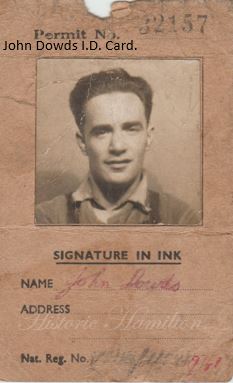 Peter Dowds sent us a copy of his father’s WW2 Identity Card. During the war, it was mandatory to keep your card with you at all times. In this picture, we have John Dowds who was a Hamilton man who lived at 4 Burnside Lane. John Dowds was a Coal Miner and he worked at Eddlewood Colliery.

Every man, woman and child had to carry an identity (ID) card at all times and the cards would include the following information:
• Name
• Sex
• Age
• Occupation, profession, trade or employment
• Address; Marital status
• Membership of Naval, Military or Air Force Reserves or Auxiliary Forces or of Civil Defence Services or Reserves.

65,000 enumerators across the country delivered forms ahead of the chosen day. On 29 September 1939, householders were required to record details on the registration forms. On the following Sunday and Monday, the enumerators visited every householder, checked the form and there and then issued a completed identity card for each of the residents. All cards at this time were the same brown/buff colour.

Do you still have an Identity Card from WW2? If you do we would like to see them.