Mharie Hughes contacted us as she was looking for information on her grandfather. Mharie wrote:

“Hi loving the site …. old pictures are great! Our family are looking for information/pictures of our late grandfather, sadly he passed away many years ago but none of our family have ever seen a photo of him.

My dad died 1981 and he himself never seen any pictures of his dad! Would you oblige us by asking your members if anybody has any memories or photos of our papa, he was named John McAulay known also as PEACHY was married to MAGGIE CALLISON we know that their family home was 1 LIVINGSTON STREET BURNBANK, tragically he was killed (as the story goes) in Burnbank 1947 near the “cross”

We would all be delighted if we received any response as we have been trying ourselves without any luck.

Mhairi, I did some research on your grandfather and unfortunately, I couldn’t track down a picture of him. I did find his obituary in the Hamilton Advertiser from 1946. Your grandfather John died on the 7th March 1946, at 6:10 am at the Glasgow Royal Infirmary and as you stated, he was married to Margaret Callison.

Your grandfather’s occupation was a Colliery Brusher (The Job of a brusher was quite a dangerous job and it involved working with dynamite to widen roads and make more space for the coal miners to work) there also seems to be some conflicting information on his occupation, as in the newspaper article from the Hamilton Advertiser it states that his occupation was an aero engine fitter, perhaps he was a colliery brusher before working as an engine fitter.

When John died, his address was indeed 1 Livingstone Street and tragically he was knocked down by a double-decker bus at Burnbank Cross. Burnbank Cross today is roughly where the old Clydesdale Bank building – now a betting shop is. The cause of John’s death was a fractured skull and laceration to the brain – it seems that he sustained a serious head injury caused by the accident. Immediately after the accident, he was taken to the Police Office in Burnbank where a doctor was sent for and it was then clear that he had to be moved to the Glasgow Royal Infirmary. 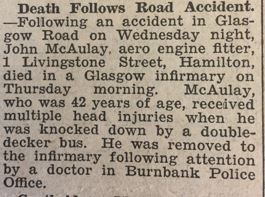 Your grandfather’s brother, A McAulay of 53 Kerr Crescent in Hamilton was the person who registered your grandfather’s death. If anyone does indeed have a picture of John McAulay or any memories, then please can you share it with us.

I wanted to look further into your family tree, as I was curious about the family names, as I also have McAulay’s in my family, so I obtained a copy of your grandparent’s marriage certificate and they were married by Rev Falconer on the 31st of August 1923 at the United free church in Burbank. I see by 1923 your great-grandfather had died before your grandfather was married, so he must have died young. Your grandmother’s parents (your great grandparents on your gran’s side) were called Richard Callison who worked as an underground fireman and Mary Summers. When your grandparents were married, your grandfather John was living at 12 Wylie Street and your grandmother Maggie was living at 23 Holyrood Street. Maggie at the time was working as a cloth factory worker and your grandfather was working as a coal miner. You also thought your grandfather had a brother called Thomas, but you weren’t sure so I can confirm that he did as he was the best man at the wedding. The bridesmaid was your grandmother’s sister Mary Callison – I thought that this added a nice little touch to the wedding and they must have been quite a close family on both sides.

I have now linked your family into my family tree, I found that we have a family connection through your Great Grandfather Andrew, he was my 1st cousin 3 times removed and he was the son of John McAulay and Agnes Adams and they were a family from Hamilton. John McAulay who was your 2 times Great Grandfather was born at Sea! On the census returns he is recorded as a British Subject Born at Sea and I have this information from the 1881, 1891 and 1901 Censuses. I haven’t fully researched this side of my family for many years, so I intend to research them again over the coming weeks.

What I can tell you is that your Great, Great, Great Grandparents were called John Adams and Jean Pettigrew. The family of Adams and Pettigrew have been a long-established family who have been living in Hamilton for hundreds of years and still to this day, their descendants of this family line still live in the town. John and Jean were our 3 times Great Grandparents so that will make us 4th Cousins. Pleased to meet you.

Your 3 times Grandfather John Adams was born in the year 1829 in Hamilton and he was one of the many Chimney Sweepers in the town and was married twice, first to a lady called Margaret Doyle who died young and they had 1 child called James, he then married Jean and they had ten children, (Not much to do down in the Auld Toon in the mid-1800s) they lived in a couple of different houses in Church Street and John died on the 1st November 1884 at his house at 21 Church Street, he was 57 years old and he also died of T.B. Your Great, Great, Grandmother was Jean Pettigrew, she was born on the 21st June 1835 at the same house, 21 Church Street. Jean Pettigrew lived at Church Street all her life and she died on the 18th of November 1874 and her cause of death was recorded as Excessive Drinking so she clearly was an alcoholic.

Moving on to our 4 X Great-grandparents and on the Adams family line they were Thomas Adams who was also a Chimney Sweep and Annie Condie. Thomas was born in Hamilton around the year 1804 and Annie Condie was also born in Hamilton around the year 1800 and Anne died between 1829 and 1834, I have not managed to track down her death certificate. Thomas and Annie Condie had at least two children between them who were John and Jean. After Annie’s death, Thomas remarried a lady called Jean Rankine who was from New Monklands and they lived at Grammar School Square where they had at least two daughters Grace and Helen. Thomas Adams (our 4th x great grandfather) died on the 7th of January 1860 at his home in Grammar School Square and his cause of death was Cardiac Decay, possibly from all the soot that he would have breathed in from all the chimneys that he swept.

Moving across to our 4 times Great Grandparents on the Pettigrew side, they were called John Pettigrew and Agnes Hodge, both yet again were born in Hamilton, they lived there all their lives and died there. John was a cotton weaver and they lived at Back Row for a time and he died on the 17th of December 1876 at his house in 14 Young Street, the cause of his death was a disease of the stomach. Agnes Hodge later worked as a Washer Woman and lived until the grand age of 91 where she died at 19 Leechlee Street, the cause of death was T.B. Together they had nine children between them.

Luckily for us, I have continued to trace our family back down a few more generations and I will try not to confuse you with all these names, but Genealogy does take time to get used to and I hope that I have explained myself as best as I can for you.

I will stay on the Pettigrew line and our 5 times Great Grandparents were called William Pettigrew and Christine Baillie. William Pettigrew was born on the 30th of May 1766 in Shotts and he was a Weaving Agent and wife Christine Baillie was born around the year 1785, I don’t have a place of birth for her. They at some point around the year 1807 moved to Hamilton and this is where this family line first set down their roots in the town. Our 6 times Great Grandparents in the Pettigrew line were called Thomas Pettigrew and Agnes Russell and they were born in Shotts and died there. Thomas was born around the year 1740 and Agnes was born around the year 1745. I don’t have any years of death for our ancestors, but I can tell you that they had five children between them. I am proud that I have traced this family line going back to 1740, this is 277 years of our family’s history that I have managed to trace.

I have added a screenshot of our family tree to try to put a visualisation together for you on what our family looks like. Please see the Family Tree below. You will also notice on the McAulay line the spelling is spelt as McAuley, this is due to early records of the name that I have transcribed.

Mharie I wish that I could have tracked down a picture of your Grandfather John and maybe there is a picture of him out there somewhere but I hope that I have given you a nice little insight of your Ancestry and where your roots come from.

If you do manage to come across a picture of your grandfather then please share with all at Historic Hamilton.