“I don’t want to be unfair you. I put the question as straight as I can! Do you swear on your oath in that box that you got these cabbages from George Russell?”

This was the question put by the Fiscal (Mr Robert Weir) in Hamilton J.P. Court on Monday to Charles Bell a miner from Udston Rows, Hamilton, who accused with having 16th or 17th September 1922, stolen Five cabbages from a field in Little Udston Farm.

Accused’s agent, Mr Nat. Cochrane, Hamilton, took exception to the form of this question and said the Fiscal was trying to “catch” Bell. The lawyer thought the question should have been: “Are these the cabbages you got from George Russell, or are they like them?”

However, after some argument, the accused answered “Yes” to the Fiscal’s original question. The case for the prosecution was that the police met the accused (Charles Bell) about 12.30 a.m. on the 17th September on the back road leading to Udston Rows.

He looked rather bulky, and when was searched by the constables he was found have four cabbages inside the lining, of his jacket. When asked where had got them, he said: ‘Take to Hamilton and I’ll tell you.”

His name and address’ were taken, and then the police went to the nearest farm (Dykehead Farm) and asked the farmer if had had cabbages stolen from his field. The farmer made a search but found that none of his cabbages had been stolen. The vegetables were then taken the Little Udston Farm, where roots were found that fitted perfectly into the cabbages found in Bell’s possession. 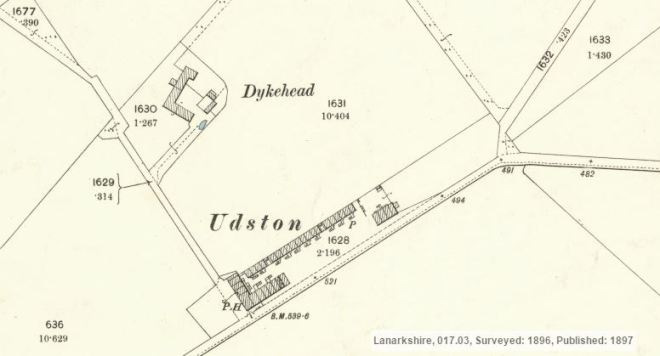 On the Tuesday night after he was caught the accused stopped by the police and told them that he had got the cabbages from a Burbank man named George Russell. A constable went to Burnbank, and Russell told him that he gave Bell four cabbages out of his allotment about 9:50 on Saturday night on the 16th of September.

The defence was that Bell met Russell in the Empire public house in Burnbank, on the Saturday night, and asked him for some cabbages for Sunday’s dinner. Russell took him to his plot and gave him four cabbages.

On his way, home the accused met two men, Andrew McDade and James McEwan on the road. He sat beside them for about two hours, during which time they drank two bottles of beer which the accused had in jacket pockets. McDade and McEwan said Bell had some cabbages in his jacket when met them. After hearing all the evidence the bench found the charge proven, and Bell was fined £2, with the alternative of going prison for twenty days.

I tried to find out what happened to Charles Bell after his court case, however, I could not track him down, perhaps he didn’t hang around in Hamilton after his trial.