Robert Moore asked Historic Hamilton what the Building was before Bairds was built. So, I thought that I would send you some pictures with a brief detail of what the building was.

The old Town Hall stood on the site of Bairds Department Store and it stood pride of place on what was called the new cross, today known as the top cross and its entrance was at the corner of Duke Street & Quarry Street.

With its tall steeple and fancy appearance, it could have passed off as a church and the old town hall was indeed a grand building and like many of old Hamilton’s bygone buildings, its demise started with underground coal mines.

It was built in 1861 and it was used as the Town Hall and later the police station. At the top of its steeple, it had a weather vane the same as the one that is on the Old Parish Church and the now demolished old Tolbooth. Like many tall structures in Hamilton, the underground coal mines made these buildings unsafe and fear of collapse.

The Steeple of the building was the first section to be removed when it started to lean over Duke Street and it became in such a dangerous condition that in the 1950s it had to be taken down brick by brick.

The old town hall later was used as a police station and as the years went on it fell into even more disrepair. It was reported that the floor was so rotten that a police constable’s foot actually went through the floor. 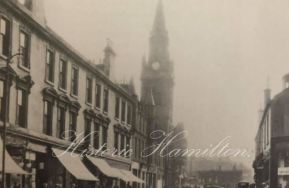