RICHARDSON FAMILY TREE.
I was contacted by Kevin Cunning at the start of the month and Kevin asked if any of the readers on Historic Hamilton knew any of his family. Kevin asked us: “Hi there, I was hoping that maybe, some of my family will be members of this page? John Richardson was on my Gran’s side and he was known for walking about with his sheepdogs’ Whiston cap”.
I put out a post and unfortunately, we couldn’t confirm if any of Kevin’s family were on the page. We did find that there were Richardson’s who lived around the Eddlewood area, so I then asked Kevin what he knew about his family so that I could dig a little deeper and Kevin could only tell me a few small details about who his grandparents were and that he wasn’t too sure about who his great-grandparents were.
Kevin also asked a family member who told him that there was a John & Susan Richardson (Nee Lawson) and that there was also the name Frew, so wanting to help Kevin, I decided to have a look at Kevin’s Ancestry. Kevin, here’s what I found.
Like many families in Hamilton, yours came from a strong coal mining community and I found that your most of your great grandfathers came to the town for employment and all from different areas in Scotland.
I started with the Cunning side of your family and in this family line, unfortunately, I could only trace your Grandfather, who as you know was called Andrew Cunning. He was born in Glasgow in 1925 at Garnagadhill (An old name, but now known as Royston or Roystonhill). I believe that your Great Grandfather on the Cunning side was also called Andrew, but now I can’t confirm this.
In 1945 Andrew married your Grandmother at Provan and your Grandmother was called Isabella Davies Richardson.
Isabella Davies Richardson was born in Hamilton in 1926 and on this side of the family, your Great Grandparents were called John Richardson & Susan Lawson.
They were married on the 22nd of February 1923 at the Bent hall on Glebe Street in Hamilton and when your great-grandfather was married, he was working as a Colliery Lamp Lighter. Staying with this family, your great grandfather was born in 1898 at Shotts and his parents (Your 2x Great Grandparents) were called John Irving Richardson & Agnes Frew.
John & Agnes Married at 95 Bent Road in Hamilton on the 4th of June 1897. John was a coal miner and he married Agnes, who was a Hamilton girl and Your 2 x Great Grandparents settled in Hamilton. John Irving Richardson was born on the 20th of October 1872 at Johnsfield, Drysdale, Dumfriesshire and this is where your Richardson family originated from.
I managed to trace this side of your family back to your 3 x Great Grandparents who were called John Richardson & Marion Irving. I found that John had various jobs as I traced him through the years. He was a Ploughman, a Farm Servant and then a Road Surfaceman. He married Marion Irving on the 5th of December 1865 at Closeburn, Dumfriesshire. 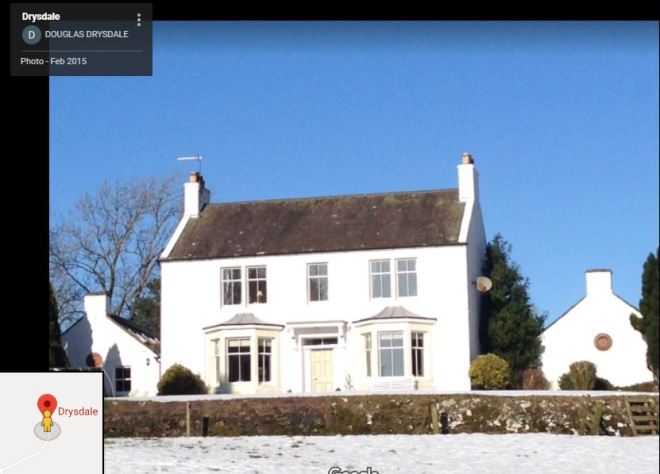 As I traced this side of your family, again I discovered that your 4 X Great Grandparents were called Joseph Richardson & Margaret Rogerson. They lived around the Lochmaben area, however, as we were venturing too far out of Hamilton, I then decided to concentrate on other members of your family tree.
Going back to your 2 x Great Grandmother Agnes Frew, as I stated, she was a Hamilton Girl. She was born at Hamilton in 1879 and her parents (Your 3x Great Grandparents) were called Alexander Frew & Agnes McGregor. They all lived in a part of Hamilton which I have never heard of, It was Called ‘New Mill’ and I believe that this area was between Eddlewood & Meikle Earnock. Alexander was born in Kilsyth c1850 and Agnes was born c1855 at Hamilton.
If we stay with Agnes, we then move on to your 4x Great Grandparents, who were also Hamiltonians and their names were Alexander McGregor & Ann McAdam. Alexander & Ann had at least nine children. Alexander was a Corn Miller and his farm & home at New Mill were owned by the Duke of Hamilton.
Alexander was born at the tiny hamlet of Dalserf in c1801 and he married your 4 x Great Grandmother Ann McAdam at Killearn on the 26th of January 1833. Kevin, I did manage to go back another generation in this family line and that was your 5x Great Grandparents, who were called Robert McGregor & Agnes Flint. Robert born at Stirling c1769 & Agnes born at Uphall, West Lothian c1768. Your 5 x Great Grandfather seems to have moved around quite a lot as he had kids born in places like Glasgow, Bothwell, Hamilton, Dalserf and Denny. I would assume that this was because of his occupation.
Kevin, if we can go back to your Great Grandmother Susan Lawson, I can now tell you about this side of the family. So, Susan was born in Hamilton c1901 and her parents (your 2 x Great Grandparents) were called William Lawson & Isabella Davies.
William was born at Stevenson in Ayrshire and he worked as a Coal Miner. Your 2 x Great Grandmother Isabella Davies was born in 1875 at Kilbirnie and before she met William, she was previously married to a man named Alexander Kerr whom she had three sons.
Her first husband died of TB on the 5th of January 1900 at 1 Glebe Street and as I told you earlier, she remarried your 2 X Great Grandfather William in December 1901. I also have a picture of your 2 x Great Grandmother Isabella, please see below.

In the picture are: (Isabella young widow of Alexander Kerr. Sitting on her knee Alexander Kerr. Hugh Kerr standing. William Kerr sitting.) None of the kids is your Great Grandfather, they are all Alexanders sons.
Your 3 x Great Grandparents were called Hugh Davies & Isabella McMenemie and again, they lived out with Hamilton at Kilbirnie. Hugh & Isabella married at Kilbirnie on the 30th of April 1872. Again, Hugh was a Coal Miner and moved from Kilbirnie to Hamilton between 1881 & 1891. Between them, they had at least ten children. Your 3 X Great Grandmother Isabella died in Hamilton in 1898, she was 45 years old.
Keeping with this side of your family, your 4 X great Grandparents were called James Davies & Mary Shields. James was a Tailor. Again, I also found that your 5 X Great grandparents were called William Davies (1792-186) & Susana Wylie (1794-1872). Again, this is as far as my research will stretch as the families are not connected with Hamilton.
Kevin, I started this by telling you that your ancestors came to Hamilton mainly because of the coal mines. This is what brought thousands of families to the town! I hope that what I have provided has given you a good insight into your roots and no doubt I have left you with more questions than answers!
The research that I have done on your family is just the basics and as I tell everyone, taking up genealogy is a fantastic hobby and if you do decide to take up this hobby, then you will uncover much more about your family.