THE PATON FAMILY OF HAMILTON.
Harry Paton Evans sent us a picture of his Grandparents who were called John Paton & Elizabeth Cunningham Kerr. Harry told us a little bit about the picture where he said it was taken round the back of 79 Cameron Crescent and he pointed out that you could see the Bing just to the left of the picture. Harry told us that this picture was took roughly around the late 1930s or early 1940s.
As Harry was kind enough to share his family photo, I thought that I would look in to his family history to see what I could find.
Harry, your grandfather John Paton was born on the 30th of June 1893 to parents George Paton & Mary Ann Simpson, who were married at Rutherglen on the 30th of August 1891. Your grandfather was born at 11 Bertram Street, Greenfield, Burnbank and he was born at 4:30 am. Now your Great Grandfather George was an educated man as he signed his name on your Grandfathers Birth certificate, rather than mark it with a X. Back in 1893 there were a lot of illiterate people, who could not read or write.
In 1901, I found your grandfather living with his mum and dad at 32 George Street in Burnbank and it appears that this is where the family settled down, probably because your great grandfather worked at the Bent Colliery. When I was looking at Census returns for your great grandfather George Paton, it seems that he was a man who was really trusted and would have been respected by people in his trade. Your Great Grandfather George Paton was born in the year 1864 at Rutherglen and he was the son of an Irishman called John Paton & your Great Grandmother was called Bridget McCabe.
George Paton worked in the coalmines and he was appointed the trusted job of checkweighman, this was documented in the 1901 Census and back then, coal miners were paid by the amount of coal that they had dug each day and in the old days of coalmining, the coal masters were frequently known to underpay the miners, so to prevent this from happening, the miners elected a trusted man of their own to weigh the coal and around 1901 your great grandfather was this man.
Your Great Grandfather George was also possibly involved in a minority Trade Union as on the 1901 Census which was taken on the night of 31st of March 1901 he had a Visitor living here with him. This visitor was a man from England who was called William Gee and he stated his occupation as an Agitator for the Social democrat federation. This statement of occupation really tells a story in itself. I can’t find any other record of why the said William Gee was visiting your Great Grandfather.
The family are still living at 32 George Street in 1911 and your Great Grandfather has a new job! He is working as an Electrical coal cutting machine man. Electric coal cutters did the job a lot faster but none the less, it was still a very dangerous job. On the 27th of December 1912, a tragic accident happened

in the No1 Shaft of the Bent Colliery. George was at work when he stopped his machine to clear away some dirt when there was a roof collapse and a large section of rock fell and entombed George. It took 4 hours for his fellow miners to get to him and when they found him he was dead. The cause of his death was recorded as asphyxia, he was only 49 years old. 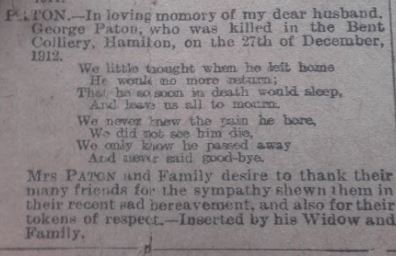 Staying with your Great Grandmother on this side of the Family, Mary Ann Simpson was the daughter of an Irish man called Robert Simpson & Margaret Baird, who was from the Paisley area. Mary Ann was born at Rutherglen 4th of December 1868 at 35 New Street.
Robert who was your 2 X great grandfather was born in Ireland c 1848 and worked as a coal Miner. He married Margaret Baird in Ireland on the 20th of April 1867.
Robert worked as a Chemical work labourer in Rutherglen from 1870 until at least 1884 when he then moved to Hamilton to work as a coal Miner. When he moved to Hamilton he worked at Earnock Colliery and he and the family moved to 37 Argyle Buildings. Your 2 x Great Grandmother Margaret Baird died on the 7th of June 1914 at Bothwell and your 2 x Great Grandfather died at Shotts on the 5th of May 1920.

Harry, I went back to have a look at your Grandmothers side of the family, Your Grandmother as you told me was called Elizabeth Cunningham Kerr. Now she was born on the 5th of August 1894 at Motherwell. The address that was registered at the time was 25 New Camp? I am unable to find anything on this address, so maybe you could fill me in on this?
Elizabeth’s parents and your Great Grandparents were called John Kerr & Agnes Cunningham and when your grandmother was born, her mum was the person who registered the birth, perhaps your great Grandfather was still down at the pub celebrating the birth.
Your 2 x great grandparents were married at Bellshill on the 31st of December 1883 and like your other great Grandparents, they were a coal mining family.
Your Great, Great grandmother Agnes Cunning died at the family home of 32 George Street in Burnbank on the 29th of February 1920. The cause of her death was Influenza & Bronchitis.

Once again Harry, thank you for sharing your picture of your grandparents and if you do not already know about your family history, then I hope that you find this interesting.