THE NETHERTON CROSS OF HAMILTON.

The oldest symbol of Christianity in Hamilton is the Netherton cross. The cross originally stood on a settlement at Netherton approximately 60 yards to the north of the motte hill which later became part of the Duke of Hamilton’s estate. 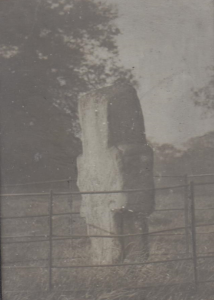 This part of the estate was later called Low Parks and would have been known as this up until the construction of M74 Motorway in the mid 1960s and then Strathclyde country park and the early 1970s . The land where the cross stood is situated alongside where the now M74 motorway is and it was just across from the Hamilton services, there is now a marker stone in its place.

The cross dates back to the eleventh or possibly the tenth century which meant that it was carved around the year c950 -1100 and it would have been influenced by other known Pictish sculptures. 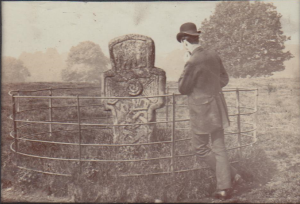 In 1857 the town council appointed a committee to confer with the Duke of Hamilton’s manager about plans to conserve the cross and ten years later 1867 the provost of Hamilton was requested to communicate with the Duke’s manager to have a railing erected around it to protect the tracing & carving as the local farmers at the time would have used the cross for tethering their livestock to it. 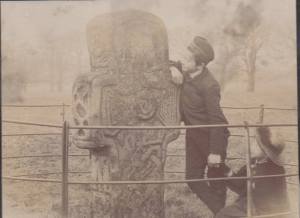 The cross was moved from low parks to the Hamilton Library at some point between the late 1800s and the early 1900s and In 1925 the town council agreed that Netherton Cross should be moved again and erected at the front of the old parish church. The cross was moved at a price of £30, this would have been £1,628.38 in today’s money.

The cross has been under the protection of the Historic Monuments Commission since 1933. Further efforts were made to protect the cross during the second world war when the cross was bricked around and filled with sand so it would be safe from the danger of bomb blasts and air raids.

In 1972 the cross underwent a three-week face-lift to establish if it would have to be moved indoors due to weather damage, an expert from the Historic Monuments Commission stated that cross could remain outside as long as it receives regular attention.

Today the cross is a reminder of the origins of Christianity in Hamilton and also provides a link to our Celtic church of the past, to the old parish church of Hamilton. If you would like to come and see this amazing relic then is can be viewed at the entrance of the old parish at Cadzow Lane. 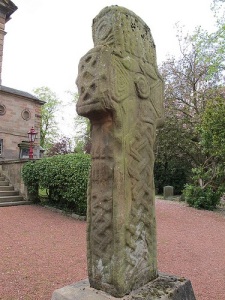 Historic Hamilton would like to thank Scott at the Hamilton Reference library for taking time to look out and donate the old pictures of the Netherton Cross.

6 thoughts on “THE NETHERTON CROSS OF HAMILTON.”